Since the first experiments in 1954 (Projectos murales), related to the instability of the plan (1956), and culminating in Caracas, 1959, with the first Amarillo aditivo and Fisicromía 1, Cruz-Diez had focused his research on the dissociation of the form-color binomial, approaching the problem from another angle than the traditional one that only contemplated the colored form. This new angle of study aimed to liberate color from form. The fragmentation of the plane fulfilled this objective.

From 1954, when he began to structure a pictorial language, Cruz-Diez had understood the need to create a language that was personal and unprecedented. He had also come to the conclusion that in order to provide new solutions he had to get rid of the traditional references to the act of painting. In principle, he eliminated tools such as the easel, the oil, the brushes, the palette and all literary and anecdotal references. He questioned his academic training by objecting to certain established notions such as the Romantic idea of the muses and inspiration or the trace of the artist's hand on the canvas. He understood that he had to express himself as a man of his time, using the means and in tune with the circumstances of his time.

His research into artistic movements and how other artists had used the chromatic element in art persuaded him that there was an opportunity to develop a new discourse in color. He also explored the fields of optics, physics, chemistry and scientific research. This accumulation of information, as well as his professional experience in the graphic arts, were decisive in the development of his own language. These studies led him to conclude that, as far as art was concerned, color had always been considered a secondary figure, a companion to form, never a protagonist, despite the fact that reality indicated precisely the opposite: colour does not need form to manifest itself.

The Proyectos Murales [Mural Projects] with their geometric and linear forms were an attempt to set up an autonomous object without reference to nature. Amongst them, Proyecto para un muro exterior manipulable [Project for an External Readily Manipulated Wall] stands out.

On the project there are structures that already prefigure what would later become Cruz-Diez’s biggest concern: to launch color into space by means of reflected light. However, the importance of the external walls lies on their social aspect rather than the aesthetic. The participatory works were designed so that the artist could share the pleasure of his studies and research with the most dispossessed people, who otherwise had no access to art.

The Parénquimas [Parenchymas] or Signos vegetales [Vegetable Signs] are works with organic forms in which there is already evidence of some interest in the problem of overlapping color and colored frames, while the design still reflects some attachment to the organic. The result resembled a traditional painting with design, composition and textures. It reached its climax though with Muro Rojo [Red Wall] from 1956, the last work of the series. There, despite the presence of organic structures, we can already see spots of color.

At the same time of the Parénquimas, Cruz-Diez produced the series of Objetos rítmicos móviles o manipulables [Mobile Rhythmic or Readily Manipulated Objects], with the intentions of modifying the notions about the objective or purpose of art. He wanted to avoid a nail and a wall being its only destiny.

Back in Caracas in mid-1956, Cruz-Diez continued working on the Parénquimas until the end of the year when he focused his research on the instability of the surface. These searches were directed particularly towards the spatial instability that occurs in the eye when confronted with situations of limited vision. The aim was to impart movement to what it never had: the surface.

This is how from the earliest works in this series, Modulación óptica de la superficie [Optical Modulation of the Surface], Construcción en el espacio [Constructions in Space] and Construcción en cadena [Construction in Progress], in 1957, and then in Estructura óptica [Optical Structure] in 1958, the artist proposes a succession of forms that are inversed as a consequence of the optical fatigue.

From these experiments on perception, Cruz-Diez was already looking for ways to launch the color into space — the basic problem of the Physichromie. The most important work of this series is Doble animación de un plano [Double Animation of a Plane] in 1959. However, the artist concluded that the evidence lacked sufficient strength, so he decided to continue his search to find a more effective means to release the color into the space.

For me, changing from the figurative to the abstract was not just a change in style; it involved being deeply convinced that the decision was conceptually correct. Then I started wondering, how am I going to get people involved in projects where the human form is not represented? 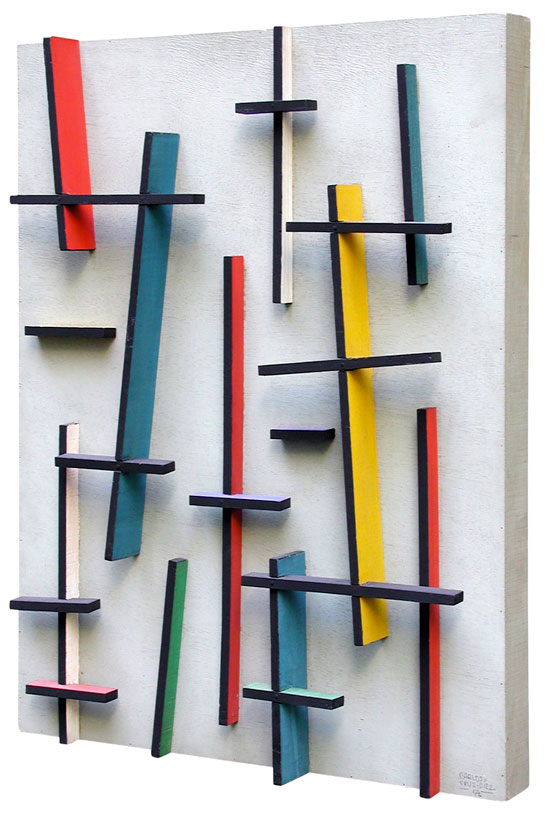 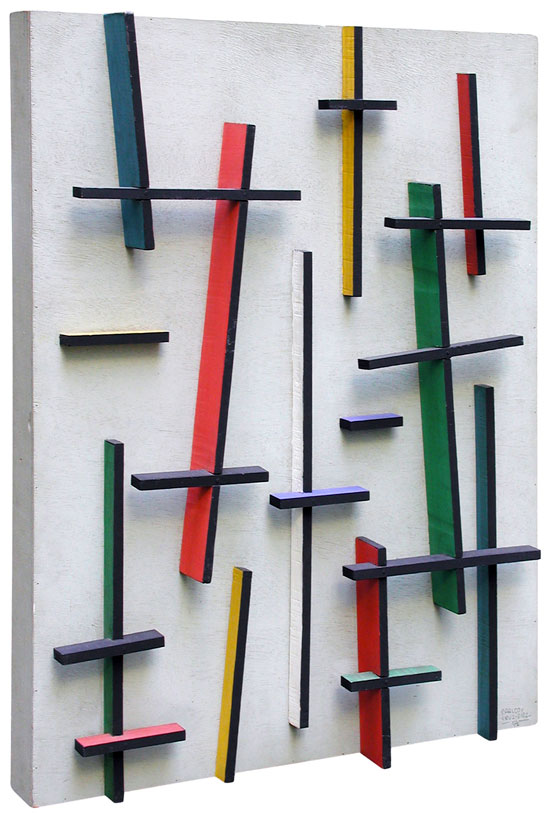 Collection of the Centre Pompidou, Paris 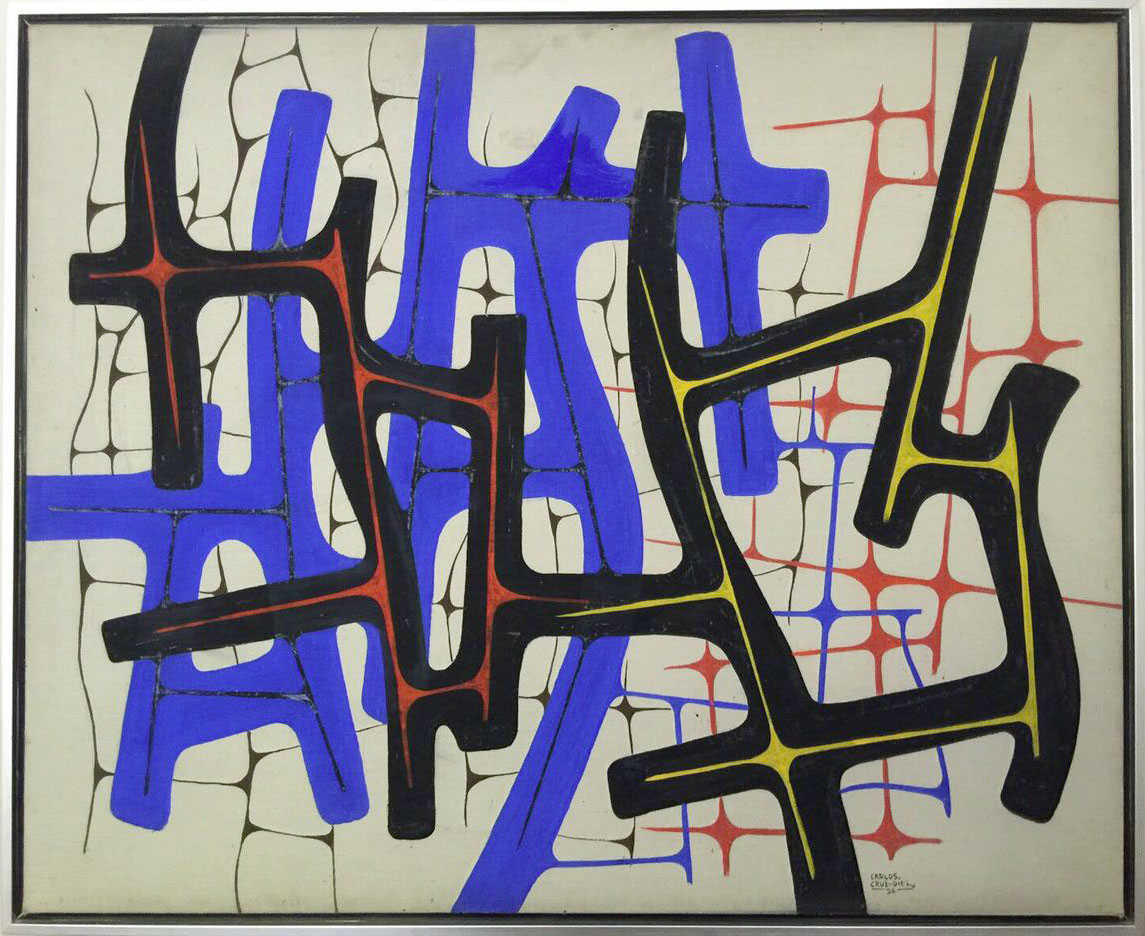 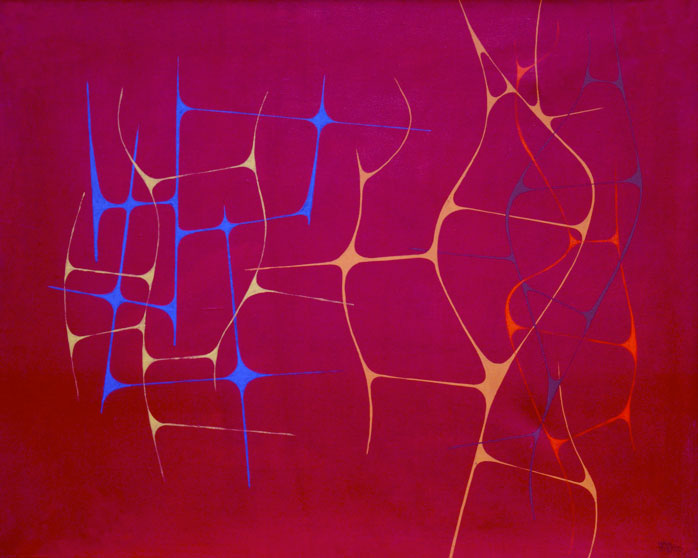 Collection of the Cruz-Diez Foundation

Collection of the Cruz-Diez Foundation

My intention in the Parénquimas and El Muro Rojo, and all my later work, was to include people on my proposal. It wasn't as much about "narrating" as about “including” people in the emotions generated by color. 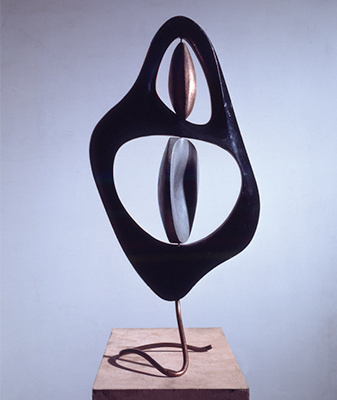 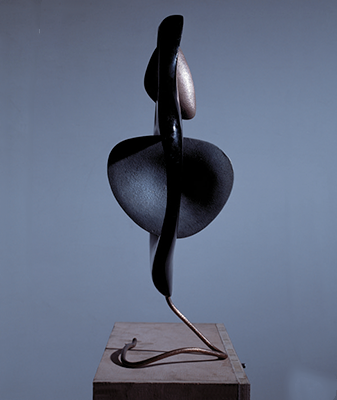 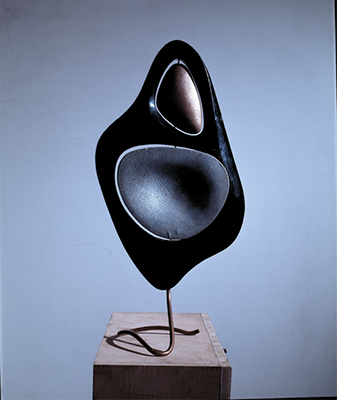 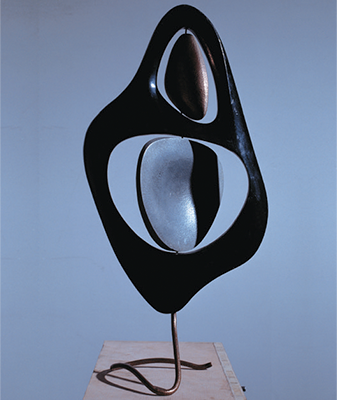 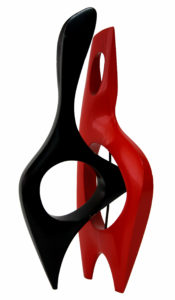 Collection of the Museum of Fine Arts, Houston (MFAH) 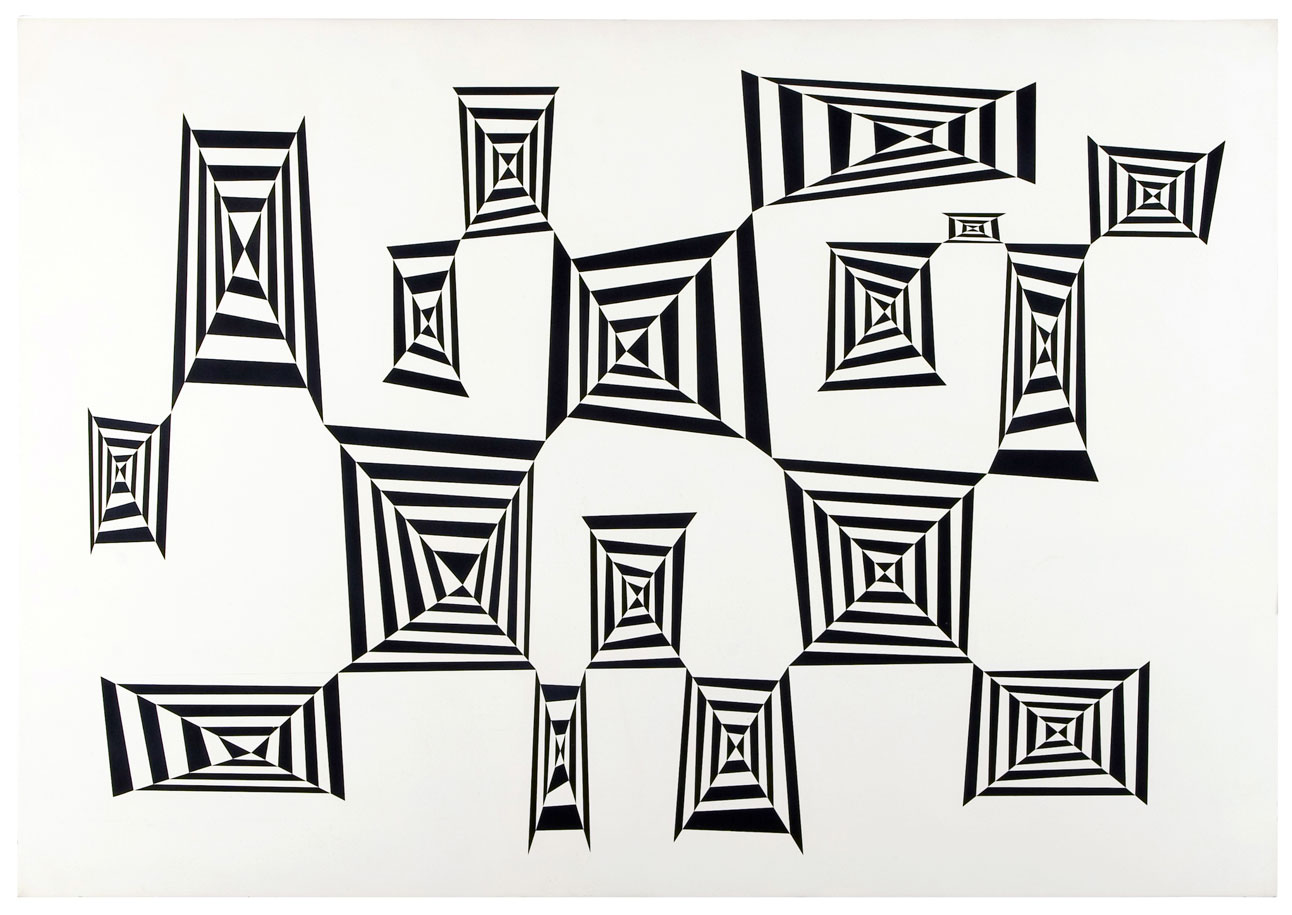 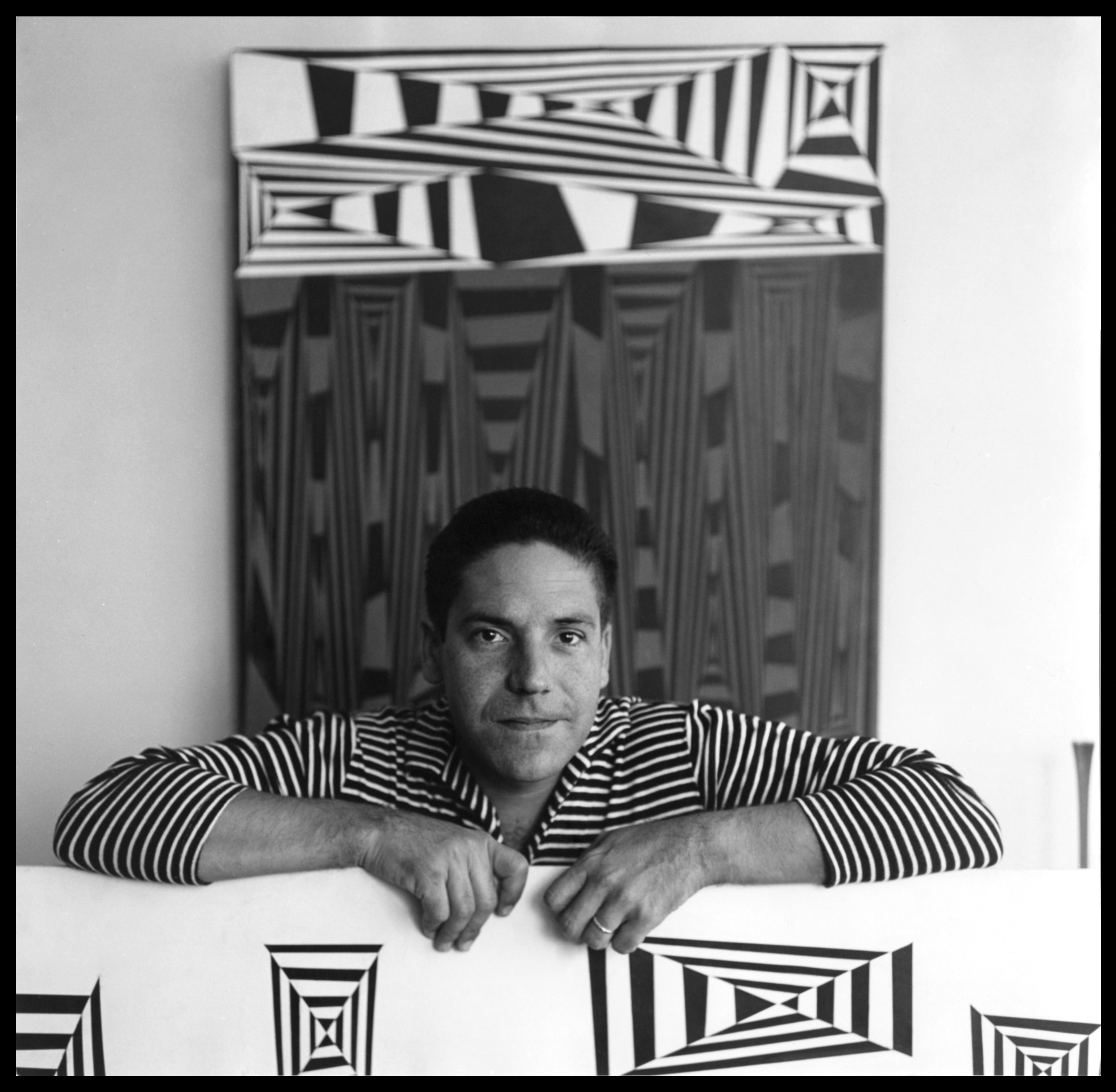 Carlos Cruz-Diez in his studio of the district Las Mercedes, Caracas, Venezuela, 1958